Vazov’s “Chatterers” change the coffee-house with a sanatorium 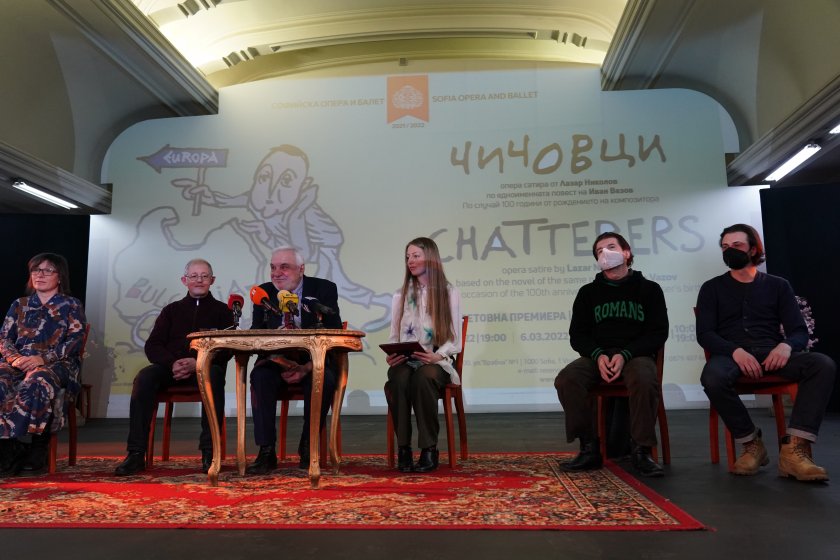 Ivan Vazov’s colourful characters from his humoristic short novel “Chatterers” change the Dzhakovoto café with a luxury sanatorium. This is part of the director’s concept of Acad. Plamen Kartaloff, who stages at Sofia Opera the music work of the same name by the composer Lazar Nikolov after Vazov’s emblematic short novel. The spectators will witness a non-standard, modern reading of “Chatterers”, which will be closer to the contemporary Bulgarian.

Remaining true to the spirit of Vazov, Plamen Kartaloff will elegantly transfer this “gallery of Bulgarian types and customs in the Turk time”, after the description of the Patriarch of Bulgarian literature, a century forwards, so that everyone of us could discover himself in “Chatterers”. The stage director shared at a special conference, dedicated to the premiere of the opera, that he has invited the writer Georgi Gospodinov to become part of the spectacle, upcoming in March. 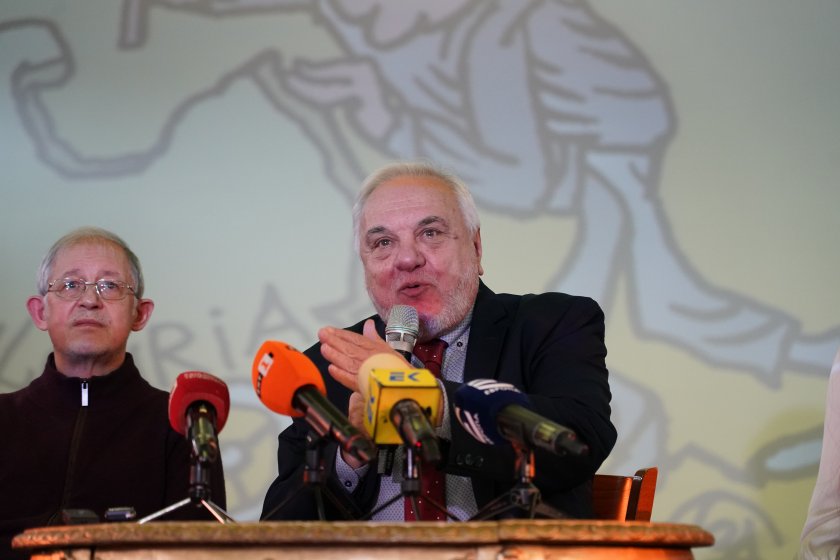 “I am happy that he accepted to take part with a short additional text, which will direct the audience into each scene”, revealed Maestro Kartaloff. Gospodinov’s text will be read by an artist and will direct the spectator to the place of action.

“With these texts Ivan Vazov will not be affected at all, but he will be a symbol and a bridge to the present, as his characters continue to develop themselves also in “Under the Yoke”. It is my right to involve in the concept one such genial contemporary like Georgi Gospodinov”, added further the Director of the Sofia Opera. 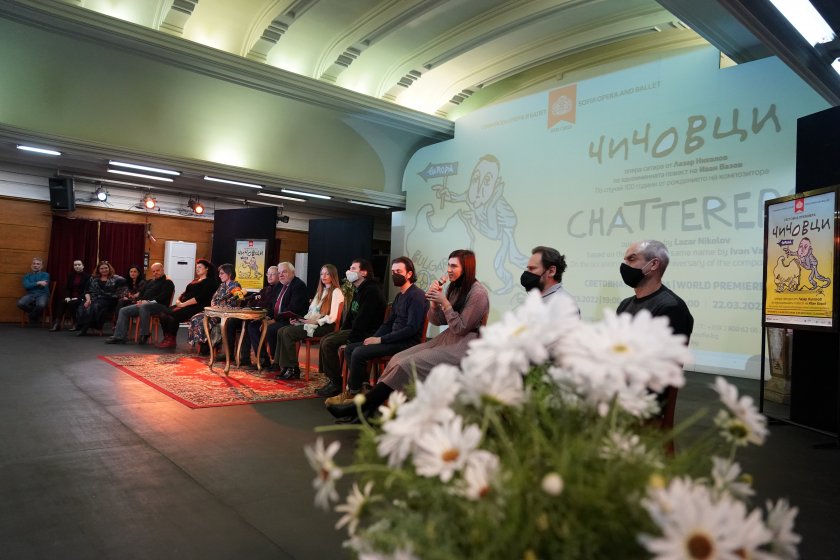 In Plamen Kartaloff’s modern reading of “Chatterers” the action takes place not in the Dzhakovoto café, but in a luxury sanatorium for rehabilitation of the chatterers, who have retired themselves to chatter and gabble. “We want to ground our chatterers to the contemporary chatterers, and they are many among us”, figuratively and with sense of humour expressed himself the eminent opera stage director.

The solution of the Maestro to make an original bridge between the Revival and the Bulgarian society of today through a text by Georgi Gospodinov is innovative and quite logical, having in mind that Vazov, however, wrote “Chatterers” ca. 140 years ago, and the action takes place 160 years ago. Yet, Lazar Nikolov’s opera was created 50 years ago, but only now it is staged for the first time in Bulgaria. 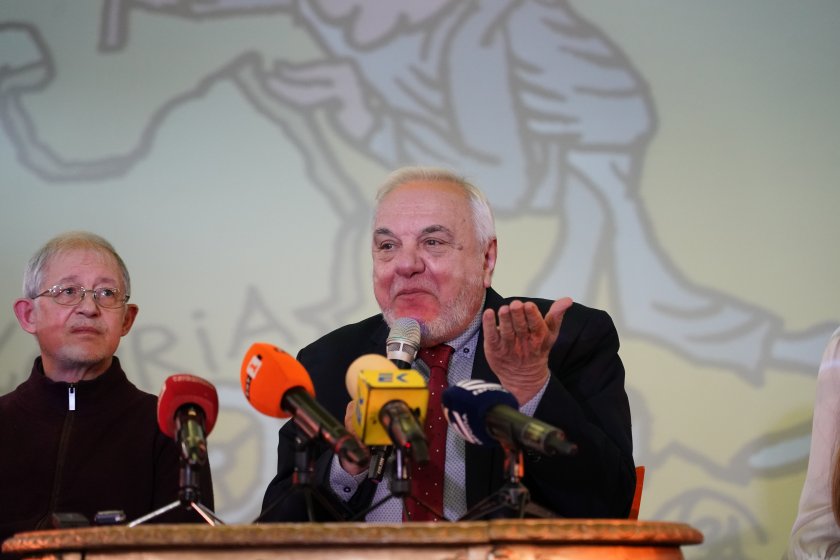 “The premiere of “Chatterers” was inscribed in my mind as stage director in the 80’s of the past century, but one cannot make everything at once”, shared Plamen Kartaloff further.

“Maybe then I wasn’t rife enough for this music. Maybe I was afraid and I didn’t feel like doing it. At that time, I had done just Pipkov, because I am a pipkovist. But Lazar Nikolov was telling me very delicately that he wanted to meet me – to see the scores. I don’t know what was rising before me, but I didn’t continue the conversation. Maestro, please excuse me. Now I am rife enough for your music. Thank you”, frank was the Director of the Sofia Opera. The staging of “Chatterers” is in token of respect to the composer and on the occasion of his 100th Anniversary. The premiere is envisaged for 2 March – one day before the National Holiday, and spectacles are upcoming on 4, 6 and 22 March too.

Certainly, for the contemporary spectator and especially for the children and the students, who as Plamen Kartaloff commented with sorrow, don’t read Vazov, the meeting with “Chatterers” will be rather interesting. In the pre-liberation Revival epoch Vazov saw the great, and the ridiculous in the Bulgarian people. It will be interesting to see how Vazov’s colourful characters Hadji Smion, Ivancho Yotata, Mironcho, Hadji Atanasiy, Varlaam Koprinarkata, Ivan Selyamsazat, Micho Beyzaseto come to life on the stage of Sofia Opera and make us laugh with their simplicity and kitchen-sink dramas. Ivan Vazov was a clever psychologist and knew the depths of the Bulgarian mentality and was turning to his characters, part of which are real prototypes too, with sympathy and irony, but not with sarcasm. Probably following this tradition of Vazov, the stage director Plamen Kartaloff too will reveal a society, sunk in its fights and problems, in which, however, we are part too. This is why the only, which remains to us is to laugh at ourselves and realize that sometimes we lose creative energy to make troubles for our neighbour, instead of unite ourselves.

Before Lupa.bg Plamen Kartaloff shared that it is envisaged the opera “Chatterers” to be presented also in Sopot – the place of birth of Ivan Vazov, as well as in Burgas, where from is the composer Lazar Nikolov. The ambition of Sofia Opera is to show the spectacle to more pupils and students, as well as to be guest in towns, from which started the Bulgarian Revival.

Yet another contemporary is interweaved in the opera “Chatterers” – this is the great caricaturist Boris Dimovski. Although 15 years he is not among us, he created cartoons and drawings, which today are even more topical than before. As for the first time Lupa.bg reported, in the posters for the opera “Chatterers” are interweaved two genial caricatures by Dimovski, which inscribe themselves in the march of the “Chatterers” and of the Bulgarian towards Europe and the modern world – a topic, which Maestro Kartaloff will probably analyse in a creative way in his staging. The idea to take namely these two satiric drawings by Boris Dimovski is of the stage director himself, who was connected with a warm and long friendship with the caricaturist.

The Director of Sofia Opera consulted about the choice of both caricatures the writer and journalist Kin Stoyanov – son of the great satiric Radoy Ralin, with whom the stage director was friend too. One of the caricatures depicts a man, who is “pushing” Bulgaria with a cart on an uneven road in direction Europe. And on the second one – an exhausted man, the whole in patches, standing next to signs, directing “Road to Europe”, “Road to America”, “Road to the Balkans”, “Road to God” or “The road is under repair”.

Conductors of the opera “Chatterers” are Zhorzh Dimitrov and Boris Spasov. Set designer is Sven Jonke, who worked also on the effective set design of “Elektra” and “Yana’s Nine Brothers”, the stage director of which is Plamen Kartaloff too. Costume designer is Stanka Vauda. 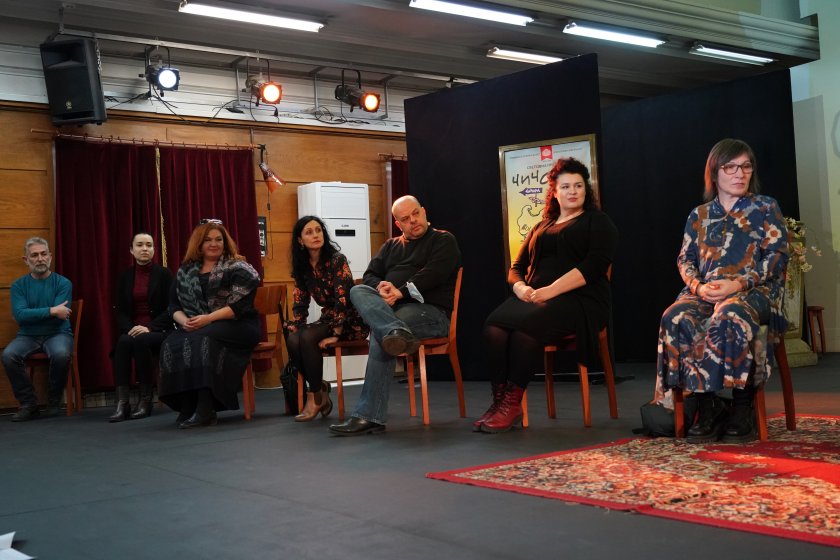