Premiere at the Sofia Opera and Ballet

“Nepotism” goes behind the frames of everyday life, beyond the time cliché of the Revival, fixed in the short novel.

There are few operas, in which the artists can demonstrate such an enviable comedic range, as in “Chatterers”

The challenges in the world of music are a registered trade mark of Acad. Plamen Kartaloff. The stage of the Sofia Opera and Ballet doesn’t have a “winter sleep” despite the pandemic obstacles for two whole years. Hardly the audience of the Capital has suggested that the premiere of the opera “Chatterers” by Lazar Nikolov would resound like a political and social bomb in this so anxious moment for the Europeans. On 2 and 4 March were the first performances with full hall, and the  primary cause for the appearance of this work is the 100th Anniversary of the composer Lazar Nikolov.

We owe to Acad. Kartaloff applauses not only for unique conception on the realization of this opera, but also for his skill to translate the archaic language of Vazov’s short novel “Chatterers” into a dynamic figuratively symbolic mise-en-scène and to interweave the ironical in the extremely complex, avantgarde musical canvas, created by Lazar Nikolov.

One sustainable concept in Bulgarian folk psychology, namely the “nepotism”, at the end of the spectacle goes behind the frames of everyday life, beyond the time cliché of the Revival, fixed in the short novel.

The dramaturgy is moving on the fragile boundary between then and now, parodying the unimportant, the futility of existence, the antinomy rebellion-slavery and national-specific understanding of “one’s own”.

The director himself defines Lazar Nikolov’s work as a phenomenon, because both the text and the music are a parody of the way of life and the manners in the Bulgarian society: “Isn’t the world of heroes a mirror of the meaningless chatters of absurd heroes? They are frozen in reflections in their time, but also insightful into the future of events that others expect to walk the path to and realize… This leads them to the refuge of a timelessness in which they are eternal and existing in perpetuum mobile.”

The topos of action is a serene sanatorium, and the counterpoint soon appears: the neighbor’s quarrel between the Varlaam’s Wife and the Selyamsaz’s Wife. They turn into a war, and the hidden messages of the characters go beyond the original literalism. The musical language, built on the prosody of the Vasov’s stylistic, deserves attention. “Translating the verbal intonation into tonal heights, the composer creates a peculiar, Bulgarian in essence, recitative melody in nature… Through the Revival intonations he managed to create the image of the Bulgarian before the Liberation, whose helplessness to sacrifice himself, kills in hot but useless verbal tirades for rebellion, which stop as soon as the first danger appears” – notes in a review Georgi Tutev still in 1979.

Gradually, however, the dynamics of the action prevails, “everyday” claims to be “rebellious”, the contrast of black and white in the scenography ignites, forte turns into fortissimo, laughter is through tears, because the Bulgarian land and native soul are torn between East and West. between the hope of freedom and the fear of one’s own life. Just as, in fact, today’s political situation introduces an exalted agenda in our society through extreme gestures.

Acad. Kartaloff’s ingenious insight represents the silent scarecrows of the finale, symbolizing the United States, Russia and China. And the way to God is under repair. The idea of a narrator’s voice with a text by Georgi Gospodinov is also great before key scenes: “Does this have anything to do with us now? Whether the way we are inflamed by everything today is not like those quarrels – from the iota, through the fish’s back, to Russia and the Eastern question. By the way, the latter are on the agenda again today. The café has become Facebook. Everyone babbles at random and decides the fate of the world there, from the cosy nowhere. (And the world does not suspect anything)”. 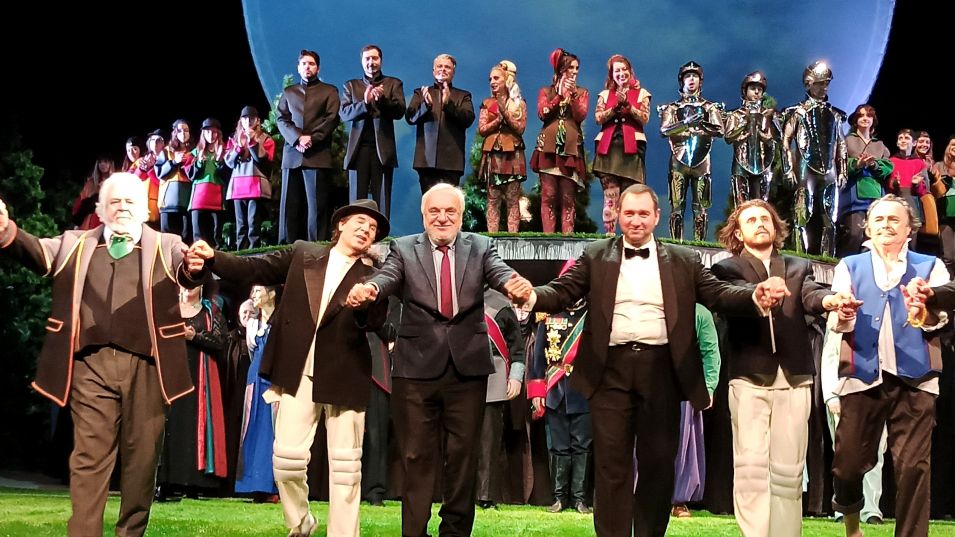 The staging of the National Opera gives us a sign that opera is on the rise – the professionalism of the orchestra, directed by Zhorzh Dimitrov, is indisputable, and in the roles of the two main characters Hadji Smion and Ivancho Yotata transformed themselves Atanas Mladenov and Kostadin Andreev. There are few operas in which artists can demonstrate such an enviable comedic range as in “Chatterers”. It is important to note the stage presence of Nikolay Pavlov (Varlaam), Nikolay Petrov (Ivan the Selyamsaz), Emil Pavlov (Mironcho), Atanas Yonkov (Hadji Atanasiy), Veselin Mihaylov (Teacher Gatyu), Ventseslav Anastasov (Mister Fratyu), Biser Georgiev (Old Priest Stavri), Angel Hristov (Nikolaki), Krasimir Dinev (Micho Bezaydeto), as well as the as well as the colourful images of Rada Toteva (Varlaam’s Wife) and Gergana Rusekova (The Selyamsaz’s Wife).

The participation of the children from the Vocal-Theatre Group “Talasamcheta” gives an interesting nuance – who notices our children in all the chaos of dreams and unattainable? Sven Jonke has created a magnetic as details and multimedia effects sets; the language of costumes speaks in impressive contrast to the diseases of our society, which has not changed in its essence for the last 150 years: again, this fear of the unknown, demonization of the Other, “everyone is a mascara” and a “false world” in which we are all comfortable. The world doesn’t think about the future, the final scene of the spectacle tells us the future – many directions, but the glass is full of Carpe diem! (Live today)! Or as Vazov says in “Under the Yoke”: “An enslaved nation, though hopeless, never commits suicide. He eats, drinks and makes children”.